Last week I finished my JS13K game called "IBEX", an apocalyptic game where you have to help some wild ibex to escape from the inferno.

This article is a technical post-mortem about the development of this game in JavaScript / WebGL and how the world is just ruled with cellular automata and computed efficiently in a GLSL shader.

A Cellular Automaton (plurial Cellular Automata) is an automaton (in other words, a state machine) based on a grid (an array) of cells. It has been discovered years ago and popularized by Stephen Wolfram in his interesting book A new Kind of Science.

The kind of Cellular Automaton I focused on for my game is 2D cellular automaton: At each generation, the cell value is determined from the previous value and the 8 adjacent cells using a finite set of rules.

It is important to understand that these rules are applied in parallel for all cells of the world. 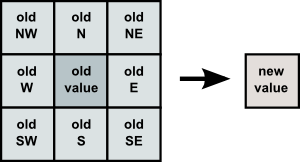 What I've found is that the WebGL and the GLSL language works well to implement a cellular automaton.

The GLSL paradigm is what I like to call functional rendering: It is, to simplify, a function (x,y) => (r,g,b,a): You fundamentally have to implement this function which gives a color for a given viewport position, and you implement it in a dedicated language which compiles to the GPU.

So we can implement a 2D cellular automaton where each cell is a real (x,y) position in the Texture and where the (r,g,b,a) color is used to encode your possible cell states, and that's a lot of possible encoding!

In my game, i've chosen to only use the "r" component to implement the cell state. But imagine all the possibilities of encoding more data per cell (like the velocity, the amount of particle in the cells,...).

Here is a boilerplate of making a Cellular Automaton in GLSL:

The complete game rules are all implemented in a GLSL fragment shader: logic.frag. It is important to understand that this fragment shader takes in input the previous world state (as an uniform texture) and computes a new state by applying the rules.

On the JavaScript side, you need to give an initial state to the texture (so you need to also encode data the same way it is done in the shader). Alternatively you can also make a shader to do this job (generating the terrain can be intense to do in JavaScript, like it is the case for my game...).

Also if you want to query the world from JavaScript, (e.g. you want to do physics or collision detection like it is also the case for my game), you need to use gl.readPixels and then decode data in JavaScript.

I'll explain this a bit later in another article. Let's now go back to the Cellular Automaton used in IBEX.

The game theme was "Four Elements: Water, Air, Earth, Fire", so I've used these 4 elements as primary elements of the cellular automaton.

Each elements also have secondary elements that can be created from each other interactions: Source, Volcano, Grass, WindLeft, WindRight.

To summary, there is 9 possible elements, and rules are determined from the 9 previous cells: This makes a LOT of possible rules. However, the rules involved here remain simple and with just a few rules.

That is the big thing about cellular automata: very simple rules produce an incredible variety of results.

In general, we can classify my game rules into 2 kind of rules: "interaction" rules and "propagation" rules. The first kind describes how two (or more!) elements interact each other. The second kind describes the way an element evolve. Some rules will also mix them both.

Earth stays: an Earth is returned if there was an Earth before. 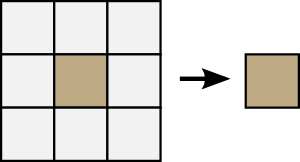 Water falls in Air: a Water is created if there was a Water on top. 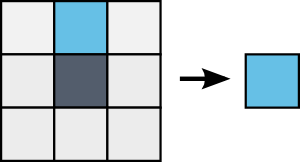 Fire grows in Air: a Fire is created if there was a Fire on bottom. 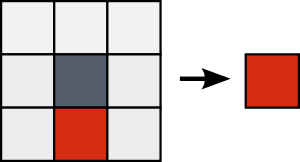 These rules produce very elementary result, we will now see how we can improve them.

More powerful rules can also be reached by using weights: you can affect a weight for each neighbor cell to give more or less importance to them.

Let's take a look at a simple example: 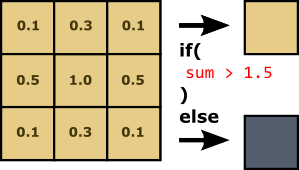 N.B.: only the "sum" is considered in the rule: if an element matches, we sum the weight of the cell, otherwise "zero".

This example is actually a weighted version of the cave rule you can find here:

Combine Randomness and Weights and you get a very powerful simulation.

To avoid seeing some (well known) patterns in the simulation I added some randomness in my rules. With randomness, the results are incredibly powerful.

In the following video, notice how cool the fire propagation can result by varying the propagation randomness factor.

GLSL is fully stateless and there is NO WAY to have a random() function in the GPU. The trick to do randomness in GLSL is by invoking some math black magic:

rand is a popular function which returns a pseudo-random value (from 0.0 to 1.0) for a given position.

My personal black magic was to define a convenient macro to have a "RAND" word which would get me a new random number.

S_ is a seed which is accumulated when calling this RAND. Because this macro will be inlined in the code, S_ must be defined in a local variable (so in summary, RAND is doing local side-effect).

Note that the current pixel position itself AND the time are both used for initializing the seed. It produces variable randomness over time and for each pixel.

Let's now see other examples where randomness can be very powerful.

The Water and Fire interactions

Here is the GLSL code:

Here are all rules which creates Water: in this rules you can also notice how the Water flows on Earth and how the occasional rain is implemented.

The Source can be created in the Earth by two rules: Either there is enough water around, Or there is source on top.

Note the important usage of randomness. 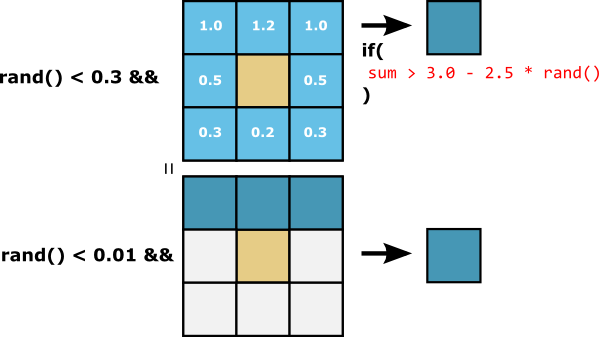 To finish, the grass needed a special extension to the so-far-used 2D cellular automaton, the grass cell value is not only being determined from the 8 adjacent cells:

To have more complex structure, the grass is determined from the previous cell at position (x, y-N), where x and y is the cell position and N is a variable value (random but constant per cell position). In other word, a forest can grow if the cell at N step under it is not a forest. This extra rule just adds a constraint on the max height that a forest can have.

Here is a demo showing the forest propagation randomness:

Drawing into the world

Drawing into the world is also done in GLSL: through uniforms. Another alternative way to do that would have be to use gl.readPixels to extract it out in JavaScript, to write into the Array and inject it back to the shader... but this solution is not optimal because readPixels is blocking and costy (CPU time).

The world is generated on the fly when the ibex progress to the right. This is done chunk by chunk.

More precisely, the world height is 256 pixels and a new part of the world is discovered each 128 pixels – In other words, the generation is divided into world chunks of (128 x 256) pixels.

Each world chunk is generated using a cellular automaton (different from the simulation one).

As shown in a previous example, we can easily generate "cave like maps" from this technique. I've added to this a few improvments:

(that with gradients of randomness)

I'll try to write more about these subjects: