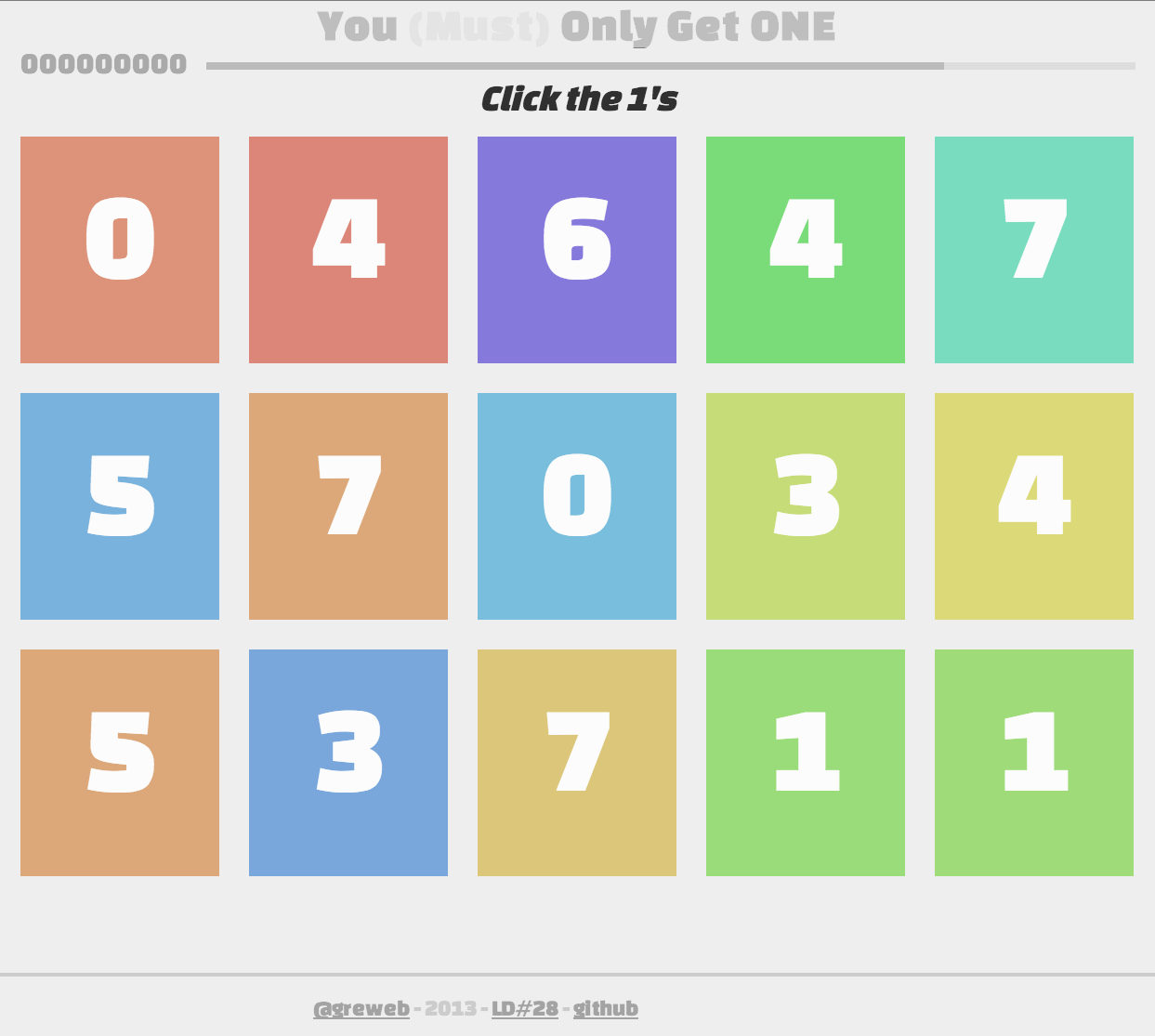 I've written a few games where restarting the game without using location.reload() was a challenge because the game variable states was so spread everywhere!

By doing more FP, you can have this restart feature by design without need to "reset" all variables because your start function just takes everything it needs in parameter and restarting is just about re-calling that function.

Like maybe 99% of games, my game has an intro (menu), a main scene and an outro scene (gameover / finish).

When you develop a game with just one big render() loop, it easily becomes a pain when you want to add more steps to the scene, it doesn't scale and fastly become spaghetti code: you tend to have to figure out in which state you are (or which part of the animation timeline) from the game state.

Hopefully, scene management is very easy to do with Promises:

How beautiful to read! Call intro then run 20 mini-games then perform outro.

intro is the menu screen where you can choose the game difficulty. outro is the game end screen where the final score is displayed. There is however no global variables shared, those are just passed from one function to another.

Let's look deeper in how it works:

TL;DR. This is just about plumbing 3 functions together!

Speed up the development

And you know what? It make development easier and faster because you can easily skip some part in any Promises chain:

I used that a lot and not only for this part, but for all part during the game development.

Promises also help you to wait resources before starting the game. You don't have to make yet another loading library, Promise already are ready for that, and you can also have proper error managment or even "progress" loading display (Q has Progress event in a Promise).

Each loading resource is a Promise and you can combine them all using Q.all.

Here is an example using Qajax and Qimage.

Here is a similar example:

My games is divided into a set of mini-games which are all independent but share a common interface. This interface was quite a WIP at the end of the weekend development but it does the job.

Here is the template I used for my game: src/games/_template.js.

A Game instance has different methods, and especially enter and leave method which are call on game enter and on game leave. It also has a .end Promise which is resolved when the Game end.

Those enter() and leave() methods return Promise in order to be plugged in the game workflow (we can wait them to finish before moving to next state).

For instance, we don't start the game timeout before it actually starts (just wait the enter() Promise to be resolved) and also we don't switch to the next game before the leave() Promise is done).

Checkout also the nextMiniGame implementation. The result of that function is the score of the mini-game and that we sum up all scores from the previous score.

We can easily subdivided work into different level of Promises chain. Here is a little schema to summary that composability:

In my game, all the animations are controlled with Promises more exactly using CSS3 Transitions via Zanimo Promise library because it fits my game (DOM-based game). The fact that a Promise can be waited and chained gives a powerful controls over CSS Transitions for making animations.

You can easily trigger animations one after another for moving an element in multiple places. You can also perform multiple animations at the same times (on 2 different elements) and wait for both to finish before triggering a third animation.

See for instance how enter() and leave() animations are done in mini-games.

In the animation ending the "memo" game I used concurrent animations: all memo cards are randomly moved out.

In the calculation game I used a chain of animations subdivided in functions:

While my game are just based on click user interaction, I've made a waitNextClick function which returns a Promise of click for the given element.

This was quite an interesting solution which is just like a jQuery "once" event but in Promise paradigm.

I was able to combine that function with Q.race which wait for one of the given Promise to be redeemed.

For instance in the cats game, I just wait the first "This one" button to be clicked:

I also used a bit the "progress" event of a Q Promise, which is a way to notify that a Promise is being resolved.

NPM & Browserify has also been used because I find this stack very productive, especially when writing a game from scratch.

Browserify has been trendy the last past year, but there is here an interesting way of organizing your code and especially reusing it. You can find a lot of available modules using NPM, Browserify will just make you able to require them using require("modulename").