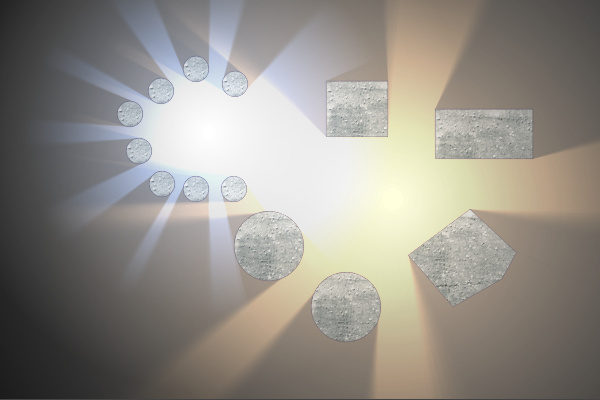 It’s a 2D scene containing 2 lights and 13 different objects rendered in real-time by a Javascript library I made called Illuminated.js.

The library is designed to add some awesome effects to your existing applications. Adding a cool atmosphere for your applications and games can make the difference!

Try the editor and Get the source code.

In this article, we will introduce the basic usages of Illuminated.js and APIs, and then explain how the engine works step-by-step.

How can I use it?

The library uses HTML5 Canvas to draw lights and shadows – so you can simply drop it straight into your existing Canvas applications: you just need to add some code in your render function and maintaining a binding between your application logic and the Illuminated.js objects.
Not using canvas? No worries! In theory, if you have an existing application or game made in full DOM, you could use Illuminated.js behind this, playing with z-index.

All the classes of the package live in window.illuminated.

A Light describes a light emit source.
An OpaqueObject specifies an 2D object used by a Lighting.
A Lighting defines the lighting of a light through a set of opaque objects, each object stops the light and casts shadows.
A DarkMask defines a dark layer which hides dark area not lighted by a set of lights. It should be drown on the top-layer to hide objects which are far from the light. This effect produces a better atmosphere and is perfect for game where light are essential (where hiding invisible area is part of the difficulty).

Example of a basic scene rendering 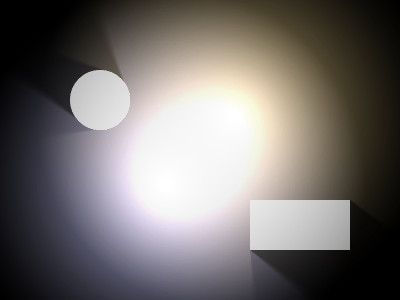 Vec2 represents a 2d position or a 2d vector. It is used everywhere in Illuminated.js.

Vec2 is inspired from Box2d’s Vec2 except that in Illuminated.js a Vec2 vector is immutable. It means every methods create a new Vec2 instance and you can safely use a same Vec2 instance everywhere because the immutability guarantees the non-modification of properties.

For now, we have only implemented one kind of light: a Lamp which is basically a radial gradient. A Lamp can also be “oriented”, it means lighting more far in a given direction.

You can easily create your own Light type by implementing its methods.

Render a mask representing the visibility (used by DarkMask).

Render the light (without any shadows).

Apply a function fn for each light sample position. By default it’s called once with the light position.

In Illuminated.js, an object which cast shadows is called an opaque object. That’s why every types inherits OpaqueObject.

A “DiscObject” is basically a 2D circlar object. You must define its center position and its radius:

You can easily create your own object type by implementing OpaqueObject methods.

Return true if the object contains a point.

Build the path of the object shape in a 2d context ctx.

Fill every shadows with ctx projected by the origin point in the object and in a given bounds.

Previous defined classes was representing datas we will now use to perform lightings and masks.

A Lighting defines the lighting of one light through a set of opaque objects.

will draw black shadows on the ctx canvas 2d context.
You usually don’t have to use it if you use render().

will draw the light with its shadows on ctx canvas 2d context.

A DarkMask defines a dark layer which hides dark area not lighted by a set of lights.

will compute the dark mask.

about compute and render

Both Lighting and DarkMask objects have compute() and render() methods.

How does it work under the hood?

The art of composing layers

The layers are all stored in a Canvas which allows us to cache it. The light is drawn using a Canvas Radial Gradient in a cache canvas only once. This is interesting because canvas gradient are processor intensive
At the end, layers are combine on the global canvas with drawImage.
But the library lets you reuse these layers to combine them the way you want.

Canvas’ globalCompositeOperation is very useful to compose layers together.
For instance, in the following example, the “Light shadow casting” layer is combined with the “Light rendering” layer to generate the “Light rendering with shadows” layer. The composition mode used is “destination-out” which remove the color of the destination image where the source image has color.

Another very useful composite operation is "lighter" which adds color values. It is used to combine two lightings.

How shadows are projected

Some rendering engine use ray tracing to render a scene, a concept very close to physics which trace from a light source a lot of rays with different paths which will collide with object and will be subject of absorption/diffraction/reflexion in accordance with the object properties…
Ray casting is a very realistic rendering solution but consuming (you need a lot of rays to avoid noises in the result image).
Illuminated.js doesn’t use ray tracing because it aims to be efficient for a real-time usage. It uses some heuristics for casting shadows.

Let’s see how shadows are projected for a polygon object.

We have a scene with a light and a triangle. 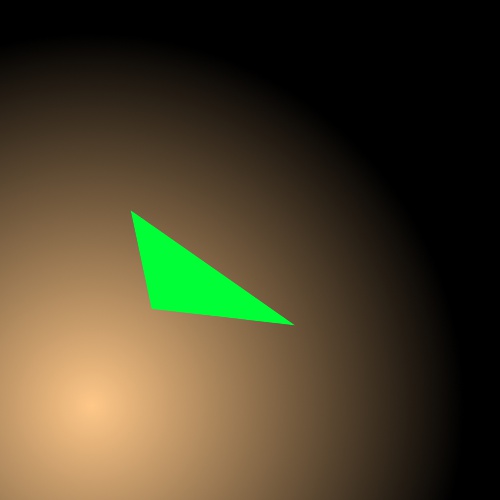 We select each edge of the polygon which is visible by the light (and in the light bounds). 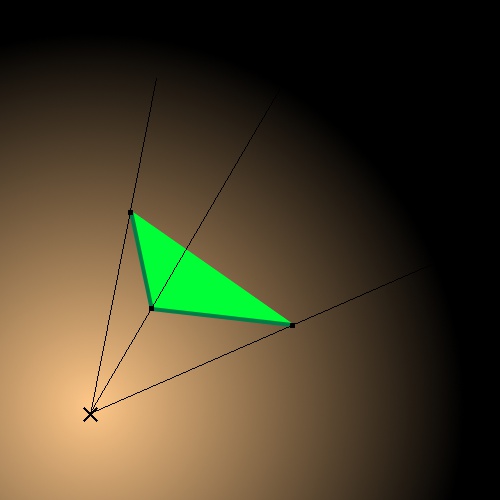 For every selected edge, we project it to generate a polygon area.

N.B. In the current implementation, we generate an hexagon projection to ensure it goes outside of the light bounds because a quadrilateral didn’t garantee it, if a light is very close to it. The projecting vector used is enough big to work for most case, but it’s still an heuristic. 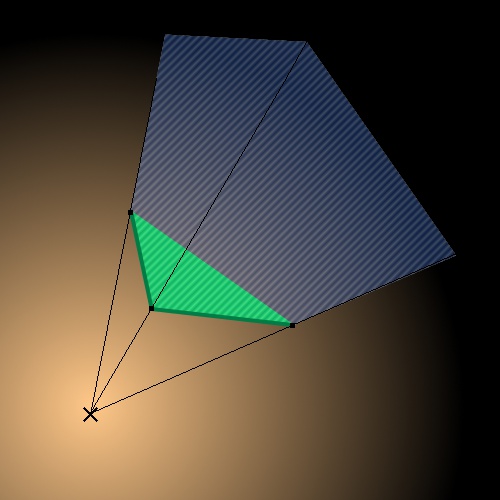 We draw black color in this polygon area. Some improvments can be made by not drawing black in the shape / ajusting the opacity of the color. 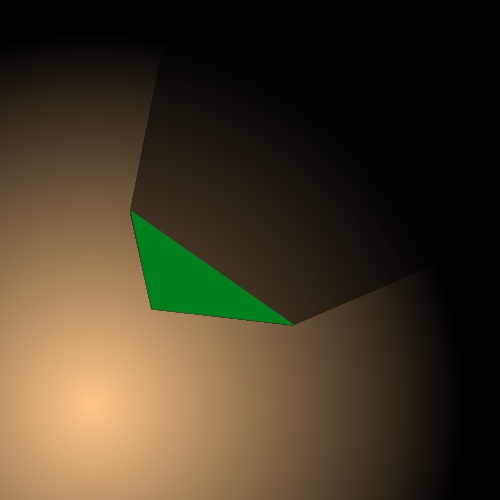 For casting blured shadows, we repeat this algorithm for each “samples” of the light. Samples are distribute around the light with a “spiral algorithm”. 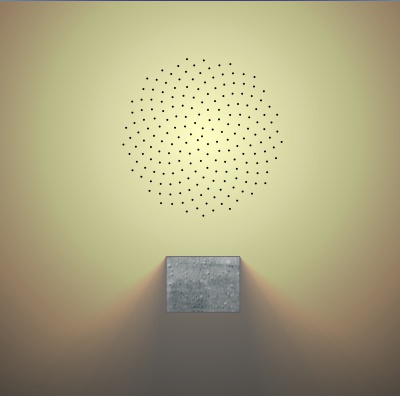 The current version of Illuminated.js needs more work, I’m aware of some bugs and some parts I need to improve:

Try the editor and Get the source code.

This article is translated to Serbo-Croatian language by Jovana Milutinovich from Webhostinggeeks.com.